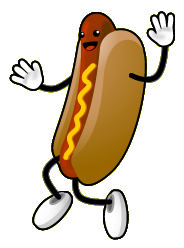 Kinda makes you feel a bit inferior, doesn't it, meatbag?

In later years, he formulated a number of long-lasting preservatives, as well as many influential theories that have also survived into modern times, including:

Jim was named world thumb wrestling champion in 684, despite a handicap of only three fingers per hand and arms the size of flexible plastic drinking straws.

He died in 1988, and was laid to rest in the cart of a Newark, New Jersey street vendor, where he was sold to feed a hungry toddler.

(Keep this in mind the next time you peer into an aluminum vat of wieners, and wonder what you are even doing there in the first place.) Not only that but it might be the Rainbow Factory for all you know. Get out of there. Fast!