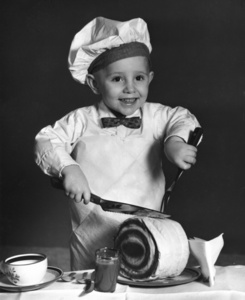 “Went on a trip to California with him once. I don't remember what happened, except that I was never hungry for the entire trip.”

“A mouthful of German sausage is a thing of great beauty”

Not surprisingly, Oscar Mayer was born in Bavaria, Germany, the hotbed of tubular meat since the first ancient butchers looked down at the rubble of discarded organs and miscellaneous shavings at their feet and pondered, "How can I sell this?"

Like most Bavarians, and indeed like most young boys worldwide, young Oscar's fascination with the wiener began early in life. Beginning from the age of two, it was not uncommon for Oscar to spend many hours of solitary amusement, playing with his meat. His parents, a progressive couple highly influenced by the teachings of Dr. Maria Montessori, allowed Oscar a wide berth to explore and develop his natural abilities.

While, strictly speaking, he never developed prowess as an athlete, he was given to participating in long "marathons", the likes of which would probably draw curious onlookers and perhaps a few enthusiastic spectators, but also the attention of the police were he ever to have performed them publicly.

At the age of 14, Oscar moved to America after the family grocery business failed. As is turns out, even in a liberal society, there is a limit as to how much frankfurter fondling is considered acceptable. Customers were so skeptical about the handling and travel history of the items for sale in the Mayer family store, they eventually deserted completely.

Oscar worked in a number of butcher shops in Detroit, but was fired in each case for a variety of reasons, among them knocking the knackwurst, slapping the salami, and pounding the pepperoni. As had happened in Bavaria, eventually his reputation became too great, and no one would hire him.

In 1876, he moved to Chicago but his obsessive pork play again landed him in trouble, first with Armour Meat Packing Company ("We're concerned about what you're packing, and where...") and later the Kohlhammer Meat Market ("Go hammer your Kohl somewhere else, thanks.").

It was a chance meeting with his Cousin Siggy in 1892 that would change everything.

Sigmund Freud's knowledge of symbolism was great, and in the course of analyzing Oscar's dreams and his life-long obsession with tube steak, Mayer reached what can only be described as an epiphany.

Thereafter, Oscar pushed away his need for childish meatplay and instead sublimated his creative energies into producing the greatest sausage mankind had ever seen.

Along with his brothers Gottfried and Max (themselves recovering headcheese addicts), he opened a small butcher shop and renamed it "Oscar Mayer and Brothers Company", specializing in sausages. In short order, he distinguished himself for producing biggest, firmest, and juiciest meatlogs that Chicago had ever wrapped its lips around.

In 1929, Oscar Mayer became the first company to identify their sausages with a trademark package: a clear plastic sheath with a bright yellow ring around the shaft.

Early advertising slogans were crude and homegrown: "A sheathed wiener is a safe wiener" (1929) and "Oscar Mayer: Plastic-wrapped for your protection and pleasure" (1931). Still, people seemed to get the message and sales ballooned upward and remained firm while competitor sales turned flaccid. 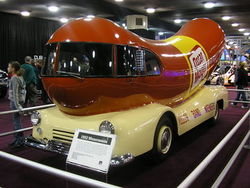 Built by Ford, Inspired by Freud.

One of Oscar's proudest achievements, and indeed the one most incarnate of the powerful and symbolic dreams he'd shared with Cousin Siggy all those years ago, was the erection of the first Wienermobile.

Measuring an impressive 13-feet long, it never failed to elicit gasps of surprise and cooed vowels of appreciation whenever it popped out unexpectedly, sliding gracefully down the street to the delight and shock of passers by.

Still bound by Mayer's need to erect ever-larger and more eye-popping products, the Wienermobile was replaced and supplemented over the coming decades by newer and increasingly longer models.

Mayer retained a firm grasp on the head of his company's board of directors until the very end. Under his skilled handling, his meat operation was stimulated to ever greater lengths of achievement and unprecedented public exposure, until his arrest death in 1955.

"He had the magic touch," lamented Elleva Schlong-Gobbler, head of Quality Control Testing.

At his request, he was run through the meat grinder in lieu of cremation, then stuffed into the longest sausage skin ever commercially produced (417 feet). Traditional burial was impossible, so his remains were butted up against the decorative stone edging along the memorial gardens, then marked with a really long plaque.

Presently, Oscar Mayer is a subsidiary of the Altria Group, formerly known as Phillip Morris and traded on the DAX in Frankfurt. It is a fitting partnership, given both firms' long experience with tubular products for oral delivery.

Today, "Oscar Mayer®" continues to reign supreme as one of best-known names in the meat industry, and meat packing plant floors have never been cleaner.