Sir Jimmy Savile was a bloke from Yorkshire, England. Jimmy appeared in around 17 million TV programmes in his lifetime, including Jim'll Fix It, Top Of The Pops and some adverts, always demonstrating his ability to create catchphrases wherever and whenever he went. 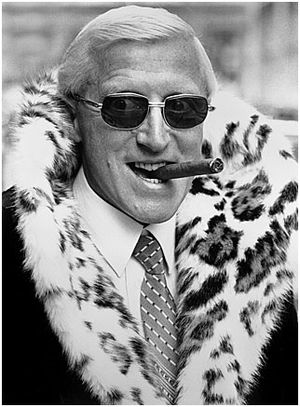 The band's name was shawaddywaddy.

Savile grew up on the dirty scum-ridden streets of Leeds, a disadvantage that seemingly encouraged his efforts to make Britain a better place. His 'talent' was recognised a young child, and by the age of 5 he had God-Like status in West Yorkshire; by the time he was 10 he had become Supreme Overlord of The North. He always maintained the same appearance since birth, managing to light a cigar as an embryo, never changing the cigar once in his entire lifetime. Rumours he was a member of Al-Qaeda have been neither denied or confirmed.

On becoming an adult he was immediately contacted by thousands of TV broadcasters, choosing the BBC due to their promise to pay him in Cigars and Stella Artois. He took up a role as presenter of Top Of The Pops, and personally lived in the studio for around seventeen years after "forgetting where the door was".

During an epiphany at the age of 29, Jimmy Savile selflessly decided he was to spend his life spreading his 'talent' throughout the country. He set up a show named Jim'll Fix it, where he would get people to contact him with their problems, which he would personally solve one-by-one, no matter what it took.

(He used these every time he made a transmission to the public, and was also known to fit them into lovemaking at any opportunity)