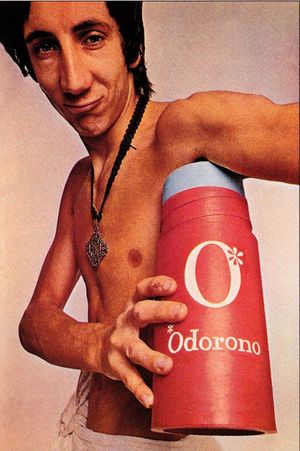 "She should have used Odorono"

Pete Townshend is the kind of guy you despise... but still are completely obsessed with for some reason. He is mainly known for his love of deodorant, particularly Odorono, but also has done stuff with a band called The Who. He is the one guy that made deodorant cool. Without him, deodorant would be lamer than his singing voice. in In fact, he digs Odorono so much, he dumped his girlfriend (who was extra smelly due to her love of bathing in Heinz baked beans) for a stick of Odorono.

Ever since Pete Townshend first noticed a swimming pool beneath his arms, he knew that deodorant was his passion. He was much respected in his school due to being the only male person that smelled halfway decent.
"How the heck do you smell like baby powder?" a boy that was infused with wonderful sweaty human smell said.
By the time he was older, he was older and needed more deodorant.

A deodorant brand called Odorono recognized Pete's awesomeness. He then posed in various positions to show the pure sexiness of deodorant. How it makes your body so clear and beautiful, so luscious and desirable.

By the time he joined The Who, everyone loved him. He became an icon of the Deodorant Revolution, and, due to his Odorono publicity, was one of the most instantly recognizable people in the world. The Deodorant Revolution was a time when people realized the true inner power of deodorant. How it possessed magical elements, and the wearer would be granted with the ability to access the farthest reaches of the universe. Without deodorant, they were stuck with their pathetic human smell. With deodorant, they could soar into the universe of beautiful aromas.

In other words, without Pete, our universe would smell like wet dog multiplied by infinity.