It's plastic... it's all plastic. Did you know this isn't plastic?

But that's not the point. The point is the pointy end of the squid. Because it's pointy! Pointy! POINTY!

This is not plastic.

This is a mind wandering off task.

With plastic. Squids made of plastic are very pointy, after all.

The Pointy End of Plastic[edit]

The pointy end of plastic is very pointy, stemming from the fact that it is the pointy end of plastic, and, at that, very much a squid. And pointy. If the squid, however, is another kind of squid and not plastic at all, then things may go a little differently. Cuttlefish may get involved. Scuttlefish, too. Those things are so not pointy that they simply must not be plastic.

The problem is, this is only the pointy end of plastic. There are many other ends, some much less pointy than others, and thus all manner of things may actually be plastic, pointy or no. 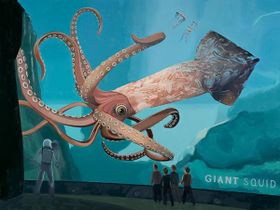 This squid is plastic. Can you tell?

This is what makes it so obnoxious.

Thus, wood is a kind of squid. But wood is also not unlike ducks, which, just like witches, float. It must be magical or something, because apparently, that means ducks and witches are also plastic. In fact, everything is plastic!