That's not your head

~ Unrelated Quote Guy on that not being your head

So I tells him. "It isn't OH NO!" But he says "ya ya ya it is!" BUT IT WAS HAROLD LAUDER WITH MICKEYMOUSE'S HEAD!

SO then I left to the market because it was market day, but everyday is MARKET DAY EXCEPT FOR CHRISTMAS. SO Then I left to a yodeling contest.

EVERYONE YODELED! But frank. 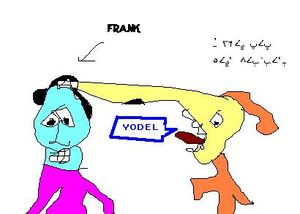 I know you love potatoes. See frank not YEDEL!!

Bu We forgave him. Jellybeans are what I like to do. But they aren't to big. Hamburgers are too big. When you have three jellybeans they ARE TOOOO OBIG!!!!!!!. ?

Scottish Goats love boats. JUMPING IN OCEAN AND SHARKS MOTION! THEY LOVE BEING IN SAND AND NEVER SEEING DRY LAND!

Akoni. Akoni Akoni. THATS A NAME IN HISPANOHJOG! Nope. HAWIASA! ()3185 a cobe code. secret. I kept going to the store this is a story not mindless words. No It is. Nope you fatwone. AT DRONE! NOT KNOWING WHAT YOU DO BUT DOING WHAT THEY DO! Pop goes the hedge hog.

Col loved french fires so he left them in a pit of poison ivy.

TO THE YOdeling contest. Every one yodeled.