i can prove that highschool is absolutely wild, here's proof[edit]

1. 3-22-2019 I went to the health room to take my medicine, and no joke there was like 5 pizzas and a pan of brownies. I'd actually forgotten there was a blood drive today, but... Yeah.
2. The time a site wanted my Latin teacher to pay economy shipping on a sarcophagus. Also, all my friends from last year were all in the same class. Just imagine how that played out. (Same goes for Biology, and PE.)

what my "sense of humor" has become[edit]

high school is great. my sense of humor has changed so much that now i can literally look at an apple on the ground and start snickering. also, random things being thrown across the lunchroom, like shoes

Okay, so I was looking for a copy of LG5 to add to my record collection. And obviously, for me anything less than the best is a felony, so I'm looking for the best-condition and cheapest records. I see one copy that's near-mint condition AND is a promo, but not a white label promo. This is a good thing, you'll find out why soon. (5.12.21 EDIT: There are actually no white-label LG5 copies. Apparently that's how it was made. The only way to denote a promo copy is the gold stamp on the top right corner of the back cover.) After So my mum buys it for me, and I'm like "heck yes great condition promo cant wait". And then it arrives. It fucking arrives. (If you can't tell, I'm never getting over this) It arrived with one cornet VISIBLY BENT. So obviously something happened en route to my house. So, being pissed as I am, I take the package and open it. Holding the record with the front part of the cover facing you, there's a CREASE in the upper corner. This is going south fast. So I take the record out of the album. And guess what? There is a crack. Not like some hairline-thin, "not even broken off, barely even a crack, but it could get there" kind of crack. A BREAK. Right where the bend in the cardboard packing was. It's fucking cracked and broken and, as I later found, unplayable because of that crack, even when I STABILIZED it. And believe me, I tried. Of course there was a huge annoying drama about it, the guy gave me a $10 discount (aka just make an offer that's like $10 less than the asking price) for any other record. Anyways, I bought Seawind from him. This time, it came in fine, thank God. Later on I bought another copy of LG5 from a different guy, who I'd bought LG3 from. THIS copy of LG5 came in nice n tidy, and also didn't have any surface scratches like the broken copy. As it turns out (not surprisingly), the secret to having your record shipped and delivered to a buyer's house is to put "FRAGILE" and "DO NOT BREAK" stickers on the package. You can even write it in Sharpie if you don't get stickers. (I learned this when I bought Robin Gibb's album Secret Agent from a different seller who is not related to this story) And what about the Seawind guy, you may ask? Well, after I got the second album delivered, I haven't bought from him since. And as it turns out (rather surprisingly),this guy NEVER puts "FRAGILE" and "DO NOT BREAK" stickers on his packages.

And THAT is the story of why there's so few copies of LG5 on eBay that ship from the USA. Because I ended up buying two of them.
And if you want to know whatever happened to the broken copy, well... I ended up just taking it in my hands and I bent it in half. I broke it. To be fair, there wasn't much else I could do with it. It looks like one of those little handheld foldable fans now. A little vinyl fan. Maybe I'll get more use out of it over vacation. Anyways, here's a lesson for eBay sellers: ALWAYS, ALWAYS, A L W A Y S put "FRAGILE" and "DO NOT BREAK" stickers on packages you send out, I mean if it's sent with USPS Media Mail. Specially then. 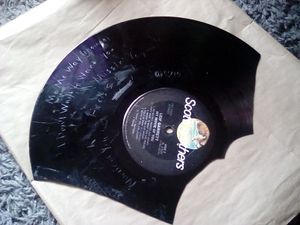 the "fan" in question

About why I need another copy of the Chic 45[edit]

Okay, so I was at the local Barnyard flea market, lookin' through 45rpm records. I remember I bought, like, six or seven 45s that day. But this is about the Chic 45. (anyways back to the story) I come across this Chic 45. This was one I didn't have at the time (the Chic record I did have was "Le Freak" on 12"), so my mum let me buy it. Now, the record sleeve this was in only allows you to see the label, and nothing else. I didn't think of this at the time, and I most certainly did NOT check any of the 45s I bought that day. So I get home, and later, I decide to play the Chic 45, and I want to listen to "A Warm Summer Night", which is the b-side and I'd never heard it before. So I take the record out of its sleeve, and I flip it over. And what do I find? This. So that's why I need a new copy of this record. But I might actually take the old copy and frame it. Because honestly, it's the strangest (and first, really) vinyl pressing goof-up I've seen. Anyways, lesson here, kids: Always check the record before you buy it. 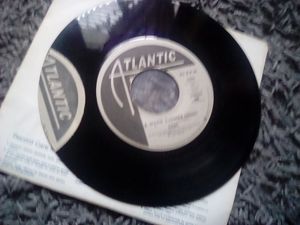 while looking through Poor-condition media, i saw a listing with the comment, "LITERALLY JUST THE COVER, TWO OF THEM INFACT, PLEASE TAKE THEM!" not gonna lie though, i'd buy poor-condition vinyl for a) shits and gigs, and b) i could try to restore it. yes, there's a way.

and oh yeah, all the base prices of the poor-condition records are literally a PENNY. ofc, that doesnt include tax and shipping added on. the most expensive Poor records is a reissue (*rolls eyes*) of the Beatles' Yellow Submarine, base price $9876.54. USD. Now, i could see if it was an original copy, but...

comment under a listing for a Poor-condition copy of Demonstration, a 7" EP by Sunami. the comment reads "HALLOWEEN SHOW EXCLUSIVE. SOLD AS IS. IF YOU FLAG, YOUR (sic) A BITCH. DON'T CONTACT ME ABOUT THE PRICE, IT'S $6K. IF YOUR (sic) NOT FROM THE BAY, YOU PAY TAX, AND THAT'S FAX (sic)."

what my discogs wantlist is like[edit] 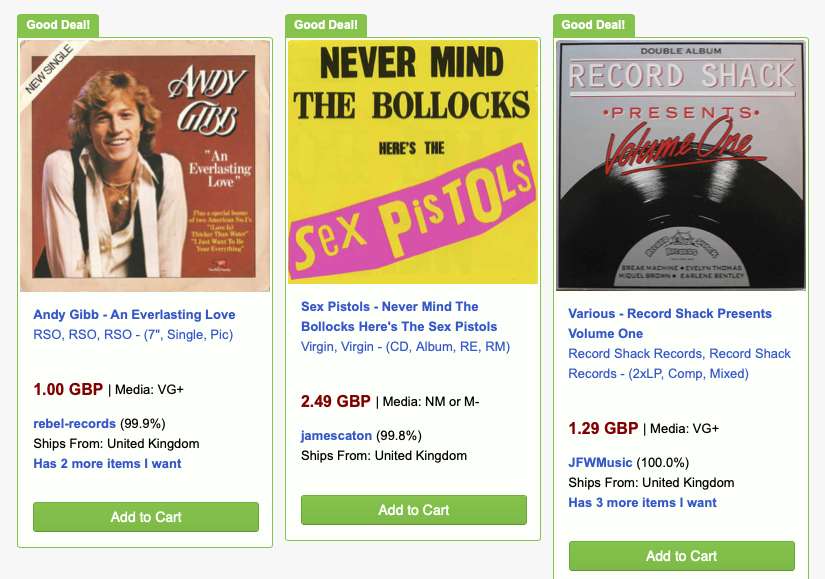 "boy howdy, i just love collecting on discogs!" --me

if i could throw my computer out the window, i would.... and my computer would probably do the same to me[edit]

some other things that happened[edit]

well, it wasn't really an "accident" - more like a sort-of fender-bender, except the only thing bent up was the side of my mum's car, and even those dents are minor.
okay, so my mum was on the way to the soccer game over at river bluff. we were running a little late already - the game started at 7:15 pm, and it was probably around 7:30 pm already. so we'd just crossed over the lake murray dam, and this chick in a ford is driving like a turtle, in the no-passing lane. so naturally, we're gonna speed up to pass the ford. we start to pass her on the left, and we were pretty ahead of the ford and we were pretty close to the turn. turns out we weren't ahead by a lot, and being two lanes over is a very wide right turn.

so anyways, we're close to the turn, mum speeds up to pass the ford chick for-real. but what we DIDN'T realize was that the ford chick sped up as well. (cue the ✨𝓊𝒽-𝑜𝒽✨) our car was about to make the turn just fine, but the ford speeds up aaaand... the worst crunching of steel i've ever heard, my god. (but it turned out that the actual damage was hardly anything)

a (NOT DEFINITIVE) list of things that happened while i was away on spring break, down by the gulf coast of flo rida (a very nice place to visit, btw):