What to do if your head catches on fire 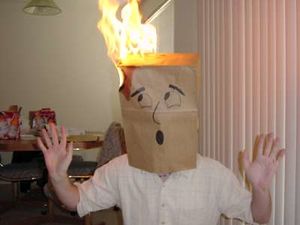 In the event that one's head is rendered partially or fully aflame, the following proceedures may prove to be of use in alleviating the predicament:

Among the scientific community, and some nautical engineers the generally accepted course of action to take in the event of a flaming head is as follows:

1: Run around screaming exclamations like, "AAH! AAH! MY HEAD IS ON FIRE! HELP MEEEEEEEEEE!" (Other common variations include: "Oh faith and begora!" "Hot! Hot! Hot! Hot!" and "It burns! IT BURRRNNSS!!!")

2: While your head combusts to a crisp, calmly telephone the nearest fire department and inform them about your situation. Be sure to include any relevant tactical data about the blaze.

3: While you await their arrival, do the chicken dance. Ensure a friend/accomplice/aquaintance videotapes it, then later uploads the clip to YouTube.

(Note: People have been recorded to enjoy seeing people perform the chicken dance while their heads are on fire.)

In fact, someone should find a photo of someone doing the chicken dance on the Internet and then Photoshop it so it looks like the guy's head is on fire, and put it in this article right about here:

Certain studies have indicated that the severe pain caused by a burning head may be lessened by burning, igniting, kindling, setting aflame, causing to combust, or otherwise rendering conflagrant various other body parts, including but not limited to: feet, eyeballs, phalanges, and earlobes.

While some people claim that flailing of the limbs may reduce the effects of fire on the body, nine out of ten scientists agree that this will only expedite the process of ending up Stone Dead

While lighting one's own head is strongly discouraged, there are certain situations when this may occur accidentally.

Should this happen, it is best to follow the standard proceedure for flaming heads. Money, prestige, money, fame, and money could be yours. In this author's sincere opinon, worldwide fame and envy (not to mention fat stacks of cash) far outweigh the advantages of having a functional, intact, and unburnt head.

Hey, it's already on fire, so you may as well make the most of it.