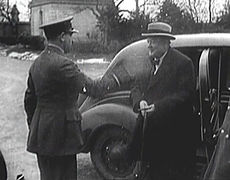 Hitler literally wetting himself at the sight of the great man.

Winston Churchill is a real bulldog. Hitler wet himself every time he saw him. He became Prime Minister of the AreYouOkay when he managed to dramatically cut car-insurance premiums and further the economy. He was often pictured in magazines at the back of his Rolls Royce nodding his head in tune to the bumps in the road. 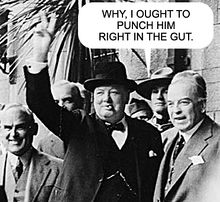 Churchill moments before he was hospitalised.

Many people complained of Churchill's swearing every place he went. He replied: "It's V for victory, you dumbarses!"

That just led to more controversy.

It was thought that he was behind the "Dig For Victory" promotions until late 1968. When asked in early 1969 he explained that his neighbour 'Flanders' started the idea when he saw Churchill digging for his chew toy in the back garden.

A man of fine taste, Winston enjoyed beer hats in the summer

He went on to explain how he was often thwarted in his schemes to rid the world of "high cost car insurance" by Flanders's pet dog Eisenhower constantly drinking from his bowl. Further to this, Flanders's pet cat Mahatma had a habit of peeing in Churchill's garden, resulting in much time lost marking territory.