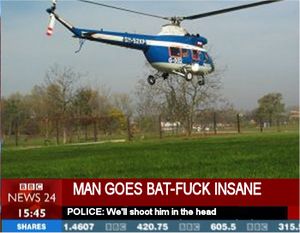 This is why we can't have nice things

“Give me the phone. I want to be put back on hold. It's the only place I know who I am any more.”

How has this not been created?

Clearly the Federalist Papers were responsible for the lesser known Boston Tea Party, which was in fact not a party, nor was there tea involved. Oh, and it wasn't in Boston. And it was 77 years later. It was the 1808 Florida Missionary Position Sabbatical and Sleepover, whereupon uppity Englishman attempted to foment a revolt against the ruling Spanish.

Cantankerous old white men huddled in their corticals, dragging their varied and unwashed sacks across maps of Sweden and moan about their gouts and declining stock portfolios. The least prominent of these, Arlo Schwifty, harassed old ladies into harassing their sons to joining the Royal Pipe and Drum, and Musket, Bear-baiting and Goat-mounting Society (based in Isle of Wight). They practiced military maneuvers naked at the slave auctions and Cinco de Mayo celebrations held by time traveling Cistercian monks.

Oh. I see what you did there.