For those looking for a German view on the subject, the Camels at Kamelopedia have an equally strange article on Kamel or even Kamelopedia 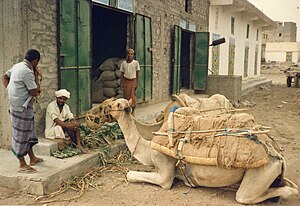 A Camel and its masters

A camel is a humped wumped chumped animal of the genus Spitoonum, often used by people to move around in the desert, and also, in a different form, for smoking. It has two species- leaded and unleaded. The first species is lethal in doses under the speed limit. The other is often used as a recreational area by bums.

Their diet is often erroneously said to be fake plants. This statement can be traced to a recently reprinted book simply called SHAG (all caps). It was written by an unkown author, whose pen name was B.Azaar. Their real diet is that of worms. They drink water wherever they can find it, which is usually in paper. This led to the Great Book Moving Van scandal. Casualties are still disputed amongst scholars.

Sir Ebenezer Puff, eminent member of SWAC(Secretly We Are Camels), more commonly known as President of the Revived Pickwick Club.