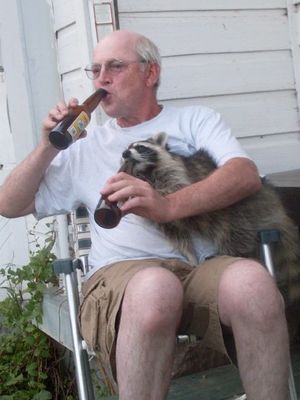 A contented Don Criceto tells war stories to his best friend "Vulva"[1] during a recent trip to Lake Winnipesaukee.

Don Criceto was a minor Sicilian Mafia Don who publicly supported the Italian Communist Party, and secretly worshipped a giant monkey god he saw in some cartoon. Learned to the point of obnoxiousness, he frequented topless cocktail parties in the Vatican since age 9. Cat allergies prevented him from actually growing coca plants at home, so he flew to distant Crete to parlay his fortune in Garbage Pail Kids trading cards into a retractable spacecraft capable of reaching the Andromeda Galaxy.