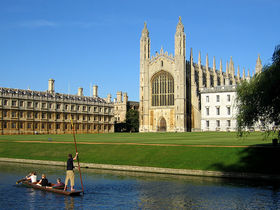 The sight enthralls the few; sickens the many

H E Meyer: 'Cambridge draws characters from all over the world, for better or for worse'

Timothy Frankland: 'That's where all the t***s go'

Cambridge is a 'city' in England. Its university is arguably one of the 'best' in the world, but whether this is judged on results or places to meet rich people is open to question. The city's founding date is unknown, as is its University's. It has produced dozens of British Prime Ministers and various other people with political/financial agendas. Though it is famed for attracting the best people from all over the world, it is also known for attracting the worst, and people in between. For instance, psychologists are still trying to determine the 'capacity for evil' in Dom Criceto's mind, an Italian member of the Intrubé dynasty. Though he originally sought a house in Cambridge to escape from the Mafia, it was burned down in a Snicket fire in June 2004, taking his life. Queen Elizabeth inclined her head in the general direction of Cambridge from Edinburgh just two months before - police are treating the coincidence as suspicious.

v • d • e
Currently Under Research
This is one of many topics currently under research. The full set of topics are shown below.
Retrieved from "http://en.illogicopedia.org/w/index.php?title=Cambridge&oldid=193559"
Categories: