“When an omelette shows you penance, turn left at junction 12...”

Food is an infamous monster ravaging the world every day. You are a potential victim everytime you open a cereal box, eat, breathe, or even exist! You must save yourself and follow these instructions: 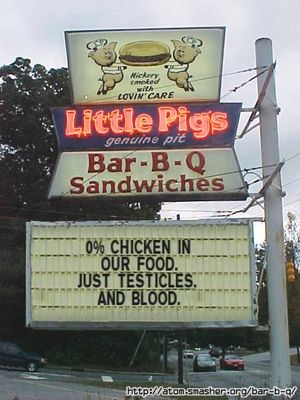 What are you talking about? Food is an insane murderer!

Cults exist in the world where, instead of killing food with a blind passion, they worship and revere it as the last true god of the undersects. People part of this subculture should be discriminated against harshly and murdered by "insert ineffective method" method. In the end times, those who worship food will be thrown into the lake of water to burn for the rest of nothingness. In short, life is meaningless and you're probably going to die a ridiculously mundane death.

Yes! Ehehehehe! Do it!
It deserves it!

What!? Let me go, you white-coated fiends!
NOOOOOOOOO!

My lawyer says that, under normal circumstances, food harmers shall be prosecuted under the charge of harming food if they choose to harm food; however harming food is acceptable if the food first harms the one who is about to harm the food. None of this applies in Wales.