It was a great shopping trip. I needed at least 25 pineapples for the luau, and I'd found 26 -- all I needed plus an extra -- and what's more they were organic, never treated with anything! So they might have a few bugs. But bugs, who cares, they're just extra high protein vegetables, eh? Nothing to get excited about.

And then, shortly after I drove out of the parking lot and started home, I heard something. A sort of a thump or maybe a thud. From the back seat. From the ... from the groceries??

Oh, but with 25 26 pineapples back there, 26 roly-poly pineapples, no doubt something just rolled out of a bag. Right? Sure, that's all. Just a rolling pineapple.

And then there was another thud, and a scraping sound.

And a sort of a squelching.

And, I swear, something squeaked. 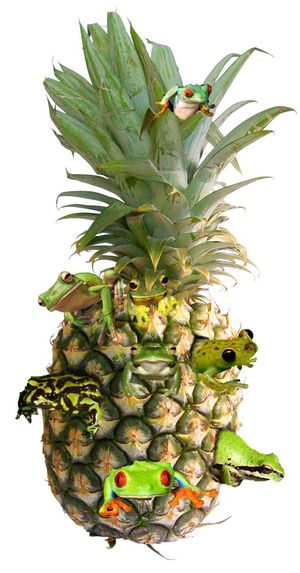 OMG what is that thing??

I turned to look at the groceries. I caught a glimpse of something -- something moving -- and then there was a loud honking, and a screech of tires -- I quick looked forward again, just in time to see a truck barrelling down on me. Oh, help! I was in the wrong lane, that was oncoming traffic! I wrenched the wheel, missed the truck, got back in my lane ... and there was a sound like a rolling pineapple, and a thud, and something behind me squeaked, again. It sounded annoyed.

I looked back, briefly. For sure, something was moving. I took a slightly longer look -- and stared. Something was ... there was a scream from outside. I looked forward, swerved just in time to avoid a little old lady, an irate little old lady, who swung at my car with her umbrella as I whizzed past. Swung, and hit ... and I heard a rear window shatter. Oh, drat. The wind whistled in, along with an occasional raindrop -- did I mention it was raining? -- and ... well ... that was the least of my worries.

The squeaking was turning into a chorus now, and ... I glanced back. Briefly. And what I saw ... oh no -- they had been there, in the pineapples, all along. But they weren't in them now. Oh, no, not any more. They had exited the pineapples, and they were coming ... coming forward... coming...

The first few, hopping, flopping, made it into the front seat.

I heard someone screaming. I realized it was me.

For I had purchased ... I couldn't believe I'd made such a mistake ... I had bought, and actually paid for .... 26 frog infested pineapples.