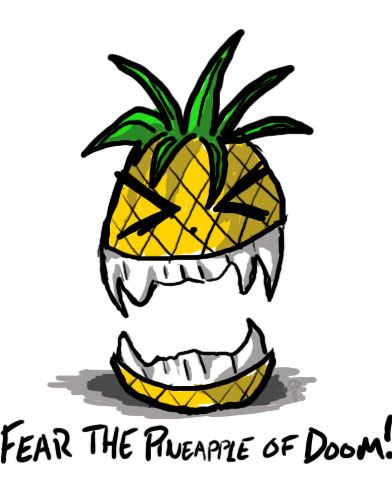 Pineapples are relatively dangerous forms of life, that have been known to have killed ⅓ of Europe's population during the cover-up of the black plague. which occurred sometime in 1993.

What can expose you to pineapples?

After a pineapple is hunted the insides can be used as as delicious food, at least thats what you think.

It is very clear pineapples evolved from t-rex's when they reach level 45 (in pokemon terms). Pineapples needed teeth because they tasted so god damn good, and everything was eating those poor fellows. So they did what they needed to survive, grew teeth, and eyes.

The pineapple thrived for 3 months after the cover-up of the black plague. They all died after the great pineapple harvest of 1999. It is widely believed Bill Clinton ate the last pineapple, which got him booted out of the white house like a year later or something.