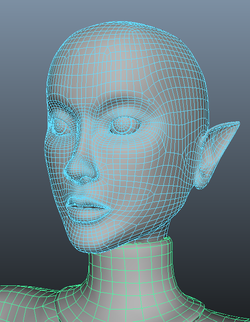 That's just boring. It's also not even that good.

3D modelling is a very complicated affair, requiring a staggering amount of time and patience and precision, and creating realistic models is perhaps even more cumbersome. Fortunately, through the use of the many tutorials and walkthroughs and guides, even the most inexperienced of users can get right to work creating masterpieces.

Most of them are overly verbose piles of excess; ignore them. To create a realistic face, just do the following:

But that's boring. Much more interesting is to make it not face-shaped in the slightest, especially if your employer actually was expecting something face-shaped[1] and make it, say, squirrel-shaped or squid-shaped or maybe even quite face-shaped aside from the minor detail in which it's covered in suction cups or has the wrong number of what may or may not be noses... granted, that later sort of thing only really works if everything else is absolutely impeccable[2]. Get your face shapes right if you're going to mess them up, else folks'll just think you're incompetent.

Although they'll probably think you are incompetent anyway, if you do that sort of thing. Just not necessarily the same sort of incompetent.

You know you're doing it right when they don't fire you and instead make you see a shrink.