From Illogicopedia
(Redirected from IPod)
Jump to navigation Jump to search 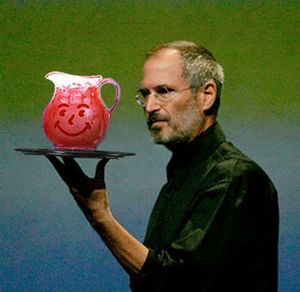 As you may or may not care, the company 'Apple', who I cannot name for legal reasons, has already produced a long line of iProducts, such as the iPod, iPod video, iPod mini, iPod nano, iPod shuffle, iPod shuffle mark II and iPhone. They have, however, recently named the next few items in their iList.

Be sure to check out these products and more at www.theAPPLEsiteLOL.com/org.uk!

Warning: Products may not actually exist in shit. Reading this means Apple gains the rights to sue you. And then sex you. Copyright for the Ibrand is owned by some guy from Imerica, who hates black people, because he's totally not racist! Apple is illogical. This article is illogical. What loser actually reads the smallprint, you loser? You're a total loser. It hates you. News just in: Apple is sueing you! Pears > Apples.