STRONGSVILLE, Kan's Ass - Just two minutes ago Mrs. Susan Madinton opened the cookie jar to find only some crumbs. With her discovery there was only one suspect in the case of the missing cookies, her son, Connor Madinton.

However, upon finding her child and accusing him, he attempted to play "The Blame Game".

"It was strange at first, seeing him point to whatever was near," says Susan. "Even though it was obvious it was him."

Connor, however, argues that it wasn't obviously him. 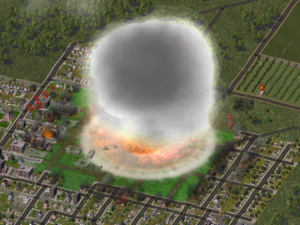 The meteorite hits the home.

"He did it!" yelled Connor whilst pointing at potted plant. Every time when asked a question, even if it was about what his name was, he pointed and blamed something. Accused objects ranged from the stuffed walrus named Frankfort in the corner of the house to a hairball in the trash can.

However, none of this really matters as the home was hit by a meteorite only moments after our reporters left the scene with only measly, uninteresting scraps of information. Neither Connor nor his mother survived the event.

"I have to say, that made the whole event worthwhile," says ?pedia field reporter User. "The explosion of the gas system made it one of the best big boomies I've seen in ages!"

Sadly, none of the ?pedia reporters were injured in the event. No one back at the site breathed a huge sigh of relief, as it was hoped the van would blow up on the ride back home.

In other newds, studies show shooting yourself in the foot my hurt you a little. Stayed tuned for more after the break.