R2D2, a character from the Star Bores movie series, is the most famous trash can of all time. However, before he was a trash can, he had an innocent robotic life.

Born 1953 in Scotland, R2D2 is the son of the Tin Man, and the mother is unkown. When he was first born, R2D2 was originally a coffee machine, sitting around in peoples' homes brewing up a nice drink. The feeling of unimportance he felt nearly drove him to the point of suicide. However, once he was sold to a coffee addict, he felt appreciated. He stayed with this man for 5 years, until he started to grow older and transform to a more advanced machine.

As a teen R2 became copy machine. His previous owner was mistified when he saw a copy machine where his coffee maker usually went, and so in an act of utter disgust sold the copier to a box manufacturing company in America. R2D2 had always wanted to go America, he heard there were some really hot animitronic women at Disneyland. And so to a local library he went, making copies of paper for 30 cents. Everyday he dreamed of going to Disneyland. But how would a mere printer do that? 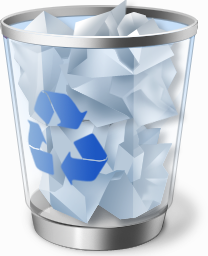 R2D2 the trash can

One random day R2D2 turned into the trash can he remains today. The librarians were mistified as to the whereabouts of their copier, it was quite crucial to them. It was traded out for some trash can, it seemed. "Well, we always need more room to throw away books" one of them stated. And so R2D2 stayed in the library for two more years. Then George Lucas walked in a said "That trash can would be perfect for my new movie!". He bought R2, and then R2 became a star.

He starred in the Star Bores movies and was an instant hit. He was the top sold toy from Star Wars. Model R2's were found in everyone's homes to be used as trash cans. And, best of all, Dineyland had many rides and attractions featuring R2. He finally got to go to Disneyland! However, when he got there, it turns out the animitronic girls weren't hot at all.

After his career came up dry in drawing in girls, R2 soon became an oil addict. Everyday he got worse and worse-- he ran out of money from all he spent on oil. His favorite was Penzoil, to him it felt "Beep boop", which means, "amazing". However, on one sad day, he had a Penzoil overdose and died.