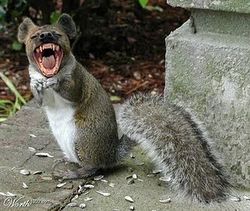 Angry Squirrel is a fearsome predator, and a bad sport.

QUERTYSMELL, Mancovia -- Local high school football mascot Angry Squirrel killed 2 and maimed 9 during an exhibition match against the Port Asbestos Feminazis last Sunday, ruining a good time for spectators and victims alike. Angry Squirrel was seen to be his usual enthusiastic and blood-thirsty self for most of the game, as the Quertysmell Fanny Farmers led the first three quarters of the days game. United Nations observers had reinforced pillboxes and jersey barrier positions in anticipation of the mascots usual fit of pique after his team wins.

However, the tables were terned when thousands of sea birds appeared on the scene, with the apparent goal of distracting the Fanny Farmers, so as to cause them to lose the game. Alka-seltzer laden water fowl descended in droves upon the playing field, fouling scuba gear and making it impossible for the home team to prevent the opposition from scoring.

When the final whistle blew, the outraged toothy mammal broke from its restraints and cut a bloody path through the visitors side of the field. In the confusion, it escaped the area and was last seen heading for Canada.