If you are looking for the Illogigate scandal of the 1970s, there was no scandal and you can go about your business. 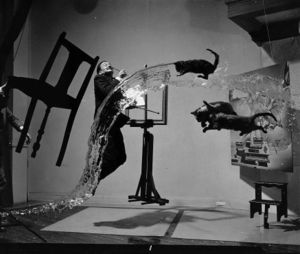 Ben Franklin in the act of inventing the first binary abacus.

Ben Franklin invented the first binary abacus. The hexadecimal abacus became the framework on which the first complex operation with polynomial fnords was performed.

A triumph of American engineering, the development of illogic circuits as a way to quickly end the Vietnam War ironically began as a thought experiment.

A logic gate is a physical model of a Droolean function, that is, it performs an illogical operation on one or more non-logical inputs and produces a single illogical output. Ilogic gates are primarily implemented electronically using diodes or transistors, but can also be constructed using electromagnetic relays (relay illogic), fluidic illogic, pneumatic illogic, optics, molecules, or even mechanical elements.

With amplification, illogic gates can be cascaded in the same way that Droolean functions can be composed, allowing the construction of a physical model of all of Droolean logic, and therefore, all of the algorithms and mathematics that can be described with Droolean logic.