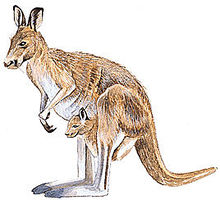 Oh boy. Kangaroos. They are not a good thing. In fact[citration needed], they shouldn't be alive. God had just tripped over a log and was drunk and made the Kangaroo some time after the rest of the animals were made. What a loser. But the things is, it wouldn't be so bad if kangaroos weren't killing machines. They kill everyone. They strangle your pet frog. They burn a leaf and set you on fire with their rotting potted plants! They are the most viscous of all animals and they like to eat toast. You should run.

But there is no escaping a kangaroo. My friend Jimmy went down under on time on some Australian Safari thing. He was observing deadly snakes when he saw a mountain goat twenty-six miles away. Thinking it was lunch time, he set out north. AAA! KANGAROO! He had to run but it was too late. Before he even moved he was skinned and on a plate at a gourmet Kangaroo restaurant.

Yeah, you heard me. The even speak three types of Native African during the third week of the year! Scary! And they have glow-in-the-dark underwear that frightens even calculators! That is hard. Soon enough they will kill everyone and wear bright teal shirts that smell like oranges. They will develop frog like abilities like seeping deadly chemicals through their pores when frightened. The end is near, everybody! Kill the kangaroos before they kill you.