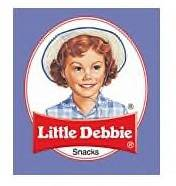 Only known photograph of the shadowy figure known to the underworld as "Little Debbie". Note checkered shirt. 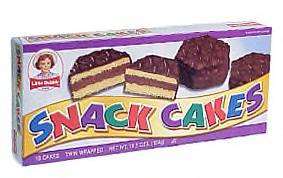 Ingesting just one snack cake can cause immediate painful death. Note multi-colored layers, showing that corpses of both black and white children were used in manufacture.

Little Debbie Snack Cakes are a toxic substance produced by combining the corpses of dead children with 1-1-1 Triethelyne. The cakes are used as animal feed, military weapons, and to stuff into the gaping maws of America's morbidly obese children.

Little Debbie Snack Cakes were first introduced by the Texas Department of Correction as a more lucrative alternative to license plate manufacture. Following the execution of all Texas inmates, production of the tainted delicacys shifted to underground bunkers and the ovens of America's evil moms, where Mountain Lowland Gorillas were trained to produce the highly explosive cakes.

During the Crisis on Infinite Earths, Little Debbie Snack Cakes were revealed to be the "missing" wife and daughter of noted clarinet player Meade "Lux" Lewis. In recent years, animal-rights activists have targeted the poisonous treats, for no reason other than that they're against everything.