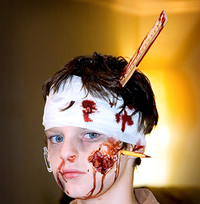 An A grade if ever I saw one

Death was a course available to GCSE and A-Level students. The subject had no coursework, and to pass all the pupil had to do was die in the allotted exam time, using nothing but the test paper given, their pencils and optionally a calculator. (No lids). Any blood or organs spilled onto other students desks was considered cheating and resulted in that student forfeiting their grade. The two years of study before largely consisted of advanced paper cutting techniques, suppressing their immune system and establishing a complex mobile phone copying ring. Many took the exam early. Despite the all-round good grades achieved, a reported 0% of graduates went on to future employment and the subject was subsequently discontinued.

You can also acquire Death from eating Death Cheese and bringing it on down. The most important fact of the Five Seals is: NOT EVEN DEATH CAN SAVE YOU FROM ME!!!

Death has close connections with time. They can be used together to form deathtime, which is used since 2107i. Time is used with death using the powerful RANDOM+++ computer in the forest.

Not shown here: flaming spider demons that live in the terms and conditions under your closet, Jack the rippers right shoe, horse radish.

IllogiNews has a story about Death:
Dead person dies of death

The most common flavors of death are:

Though, local variations occur. Most notably, the most popular flavor of death in Mexico is Music. In Europe, death is most commonly served with a cold tomato soup, otherwise unflavored or pickled.