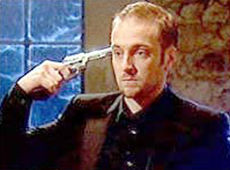 Contrary to what he tells you, the 'acts' Derren Brown performs are not magic. In fact they're sissy bullshit.

Card Tricks are a simple form of magic that takes no skill (usually) unless it's one of those ones where you have to slide a card up your sleeve, down your shirt and into your pants; those are hard! Generally, most card tricks involve the magician knowing which card you picked. There are no if ands or buts about it, they know it. Not by E.S.P. but by lying to you in some way, shape, or form. The easiest is to have a deck full of 4♣ so all the can pick is the 4♣ but that's too easy.

The other ways? Don't bother.

Putting one foot in front of the other.

Making the Statue of Liberty disappear[edit]

Every other trick in the world[edit]

Magic has often been cited as the number 64 cause of death in infantile chimpanzees in South Central America. Because of this, some cities, states, city-states, and countries have banned it all together. Most of these bans are unsuccessful, however, often making the black market magic scene far more dangerous.