This article is one of Illogicopedia's EPICs.

Read the first one here!

In the town of Nowt there was a legend of a magical book that gives you supernatural powers just like superman. But, it only appeared on one particular day.

Alas, we begin our story. Our main character, Chris is a fifteen year old boy living in the slums of Nowt. His family is very poor and hes looking for jobs to pay for school and such. He's heard the stories of that of that April Fools joke that that one kid Eric played on that other kid Johnny a couple years ago. Still, the rumor that there is a real book is out there... somewhere. Chris' brother Yorgi, believes in the book. Well, I guess we all need something to believe in. 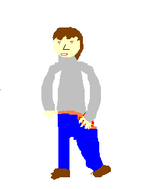 "No I'm not going with you." Chris said. He had had a bad day at school. His grades were dropping and exams were right around the corner. "Please help me look for the book." Yorgi pleaded. He was in elementary school, those kids will believe anything that someone tells them apparently. "It's not real, now go to bed." "Bed? It's four o'clock." "Whatever, just go away I'm trying to do math homework." Yorgi walked away from Chris' desk. He wondered about the legend. No... what are the odds that someone played an April Fools joke about it, and it turns out it's real... Stupid little kids... Maybe they're not stupid at all...

Chris headed to school the next day. His family couldn't afford gas, so Chris had to walk 3 miles to school. He checked his watch. 9:10. He had 5 minutes to walk three miles. He started running. He flew down his street and through backyards of his neighbors. I think he may have jumped a dog or cat or something but never mind... He had ups... Enough. He decided to take a dirt path he sometimes took when he was late. It was dangerous but he was desperate to go to school. He sprinted down the path. He looked up at the sky. It was a little bit dusk- smack! He hit the ground hard. Must have tripped over a rock he thought. Yeah, a rock. He studied the rock. It looked odd but he couldn't figure out what was wrong. Oh well, no time to study rocks. He continued on his journey to school.

After school he went back to the path to revisit that weird rock. It looked like a normal rock. A little big in size but it was just a gray rock with some moss on it. Looked normal but Chris knew there was something wrong with it... He knocked the rock with his fist. It was hollow. Chris took his fist and busted the rock open. It crumbled into 432 pieces. There was a small scroll of some sort inside of it. Chris opened the scroll. It read:

Well I know this is your favorite spot to hang so I left this letter in a rock I knew you'd recognize.
Sorry for that April Fools joke I played on you, no hard feelings. Anyway, I wanted to tell you I actually
created a magical book that gives you sick nasty powers and what not. I know it sounds weird but I wanted you
to know I put the real one right where the old one sat, in the cave, behind the waterfall. I think you deserve it
or perhaps your someone else reading this... probably not. 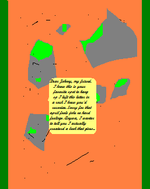 The mysterious letter to "Johnny".

Chris could not believe what he was reading. "Son of a bitch." He took off, in the direction of the waterfall.

He ran, in the middle of roads. He almost got hit like maybe three time or something he was a complete moron, but anyway. He ran past the convenient store into the roads. He stopped at the entrance to the deep woods. He could slightly see the waterfall above the trees. Only Johnny and Eric have ever gone in here. There are snakes and spiders and snipers. Wait snipers...no that's not it... Oh yeah spiders! Chris remember the letter. Tell Renaldo the spider I said hi. Chris didn't like the sound of that. He thought of what the powers could do for his family, so, he headed in the forest.

He got cut a few times by branches and such and spider webs were a pain. But, he reluctantly kept going. He saw a clearing. Smack! "Who has awoken me from my sleep?" A deep voice said. Chris jumped back, fists raised. A tree moved and shined a ray of light in front of Chris. Chris froze. He never saw anything like it... That's impossible. "The one in the red shirt with dumb hat? The small one told me you were coming. "N-n-no... I'm a friend, or... I'm not Johnny." "What is your business here then?" "Ummm... Can you show me to the waterfall... Ren-Renaldo..." 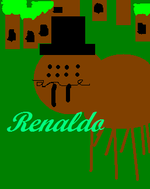 The scary spider with a mustache.

"Hmmm... This one know my name... You may pass." The monster went into the light. A giant spider, holy crap. Well, if you read The Book of Magic the First you already could have guessed that. Chris stepped though the small opening that Renaldo was covering.

Grassland. And lot's of it. It was beautiful too. Chris was amazed. The waterfall was in the distance, he could see it clearly. He headed down a dirt path leading to the waterfall. He could not believe there was a talking spider that was giant... Nevermind that, he needed to get that book and get the magical powers to save his family. He made it to a patch going up, spiraling and heading behind the water fall. He made the trek up. Going up he though about all the things he could do with magical powers. He was getting quite anxious thinking about lifting financially based buildings and talking 547 bullets and other freakishly specific things. He wondered what Yorgi would think. Maybe he would rub it in his face. Nah. Suddenly was behind the waterfall. It was quite cold but somewhat refreshing. He saw an opening to a cave and he remembered the letter. In a couple minutes his life would be changed forever. He stepped inside. There was a brown altar with a dusty, ripped book on top. It was real. 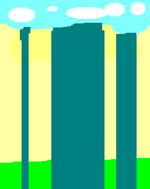 Chris ran up to the altar and grabbed the book. He opened it... Or not... It wouldn't open. He was so confused. He thought and he remembered the most important part of the legend. It was October 2nd and it could only happen on April 1st... Chris put the book down. He wasn't upset, he just walked back home. Because, he knew where it was... and once April first came along he... would be ready.