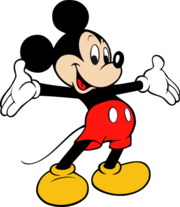 Vote Mickey Mouse this election week, or we're sending round some animators.

Mickey Mouse will go down in history as the person most voted for in American General Erections that never made President. This is due, in part, to the fact he is in fact a mouse and will make cheese the national symbol right after outlawing cats. Some might say this will actually be an improvement upon any President who has ever been into the White House, even for coffee and cookies. That, and the fact he is a cartoon character that is not real. [1]

Mouse's father, Walt Disney was cryogenically frozen after hearing his son failed to be elected in 1956. This was not his choice but the American public's after the Chicago Times reported he was a devout Hitlerite who kept Nazi memorabilia in his basement. And a duck in a sailor's suit. And a talking dog in a hat. [2]