Warning: this article may not have anything to do with Hitler, as you might think. 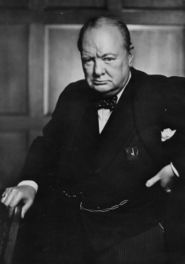 It's a little known fact that Churchill was a British nationalist. No, it's true, I swear! Actually, no, he iz a nodding dog.

Nazis are given much press coverage, especially if yo' live in the 1940s. But just how much of it is true? This article aims to dispel all myths and answer all da questions you may have about German nationalists, shamone.

Nazi stuff and stuff about the narzees[edit]

Nazis are OK. I met one once and it was OK, but my judgement was clouded by a giant chicken that descended from the sky. Yo. The giant chicken was actually Mussolini and i said "Musso wassup my man?" and he said "The war" and I said "WOW there's a war going on?" and he said "Er… yar" and I said "Oh, well call me if you need help Musso" and he was all like "I have to whip Hitler soon" and I was all like "Right… gay."

Yeah, Nazis are OK, very much so.

As I was saying…

Chicken lumps are OK, to fry or microwave or summert like that see?

Nazi comes from German Nacional Sozialist, meaning "someone with whom I have a minor political disagreement with". Like many English words, its usage has changed often throughout the years, often drastically. For example, in the late 1940's, its primary usage meant "villain from a movie". Later, in the 1980's, it's primary usage was someone who appreciates rules (such as "grammar Nazi"). It is likely to change several times in the future.

Looks like they hated them for stealing their collection of finely polished china. Then the camps were set up and it went a bit campish, like. At least they had a good run. ←←← Communist propaganda!

They sound like terrible people. Is it okay if I punch them?[edit]

Of course! Fighting Nazis is a Russian, British, and American tradition that will never die!

Hitler as a disturbed child

He dun sod all. Except do stuff with his cork.

Why did it exist? YEAH WTF?[edit]

It was around cos it was like so cool. And anyways shit happens, dunnit?

“HOLY MACARONI, I THINK I JUST BLEW UP MY OWN RETINA!”

~ The author of this article

I s'pose I'll just have to write this article with one eye now won't eye?

It was all like, well sheet, wasn't it? Bah, wish I knew more about Nazzies. Maybe I should read Mein Kampf!

The Neo nazzies are now wanting to set up a 4th Reich I think. Should be pretty sweet, good luck guys! Remember kids, HEIL MEIN FÜHRER