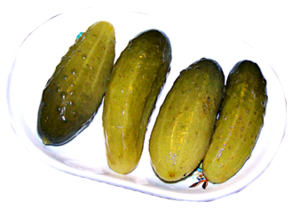 No? Well let's get on with it then.

No fudge! This is about pickles, dammit! Those muffins look pretty good though...

The metaphysics of fudge pickles have been studied by me, personally, since last Wednesday. Pickle research is funded by sympathetic old people, spare change left in vending machine coin returns, and the money stolen from your wallet. Nothing interesting has been discovered since research began, which is a good thing. Nobody wants to find out something unexpected about pickles, lest they be grossed out.

Pickles are made from Cucumbers[edit]

Lies. Filthy, damnable lies, all of it. Pickles are a sovereign nation, with a rich history and culture far removed from that of the humble cucumber. Nobody knows what it is.

The greatest pickle the world has ever known