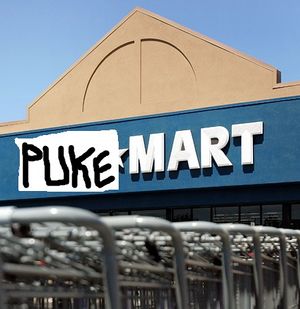 Puke Mart: For all your puke related needs.

Puke Mart is a retail store similar to Wal-Mart, except it only sells vomit.

The store was expected to go out of business rather quickly, but it has become a surprisingly popular fad amongst the American people. Products like "vomit in a can," "vomit in a box," "vomit in an indistinct carton," "vomit in a toilet," "vomit in a sink" and "vomit in a plastic bag" have become some of the most popular consumer items in the market.

"The idea came to me one night," says store founder Zeppish Dignor, "I was thinking about how hard it is to compete in the world market today, because most products are already being sold. I was trying to think of something truly original to sell. Then it came to me--I'd sell human barf!"