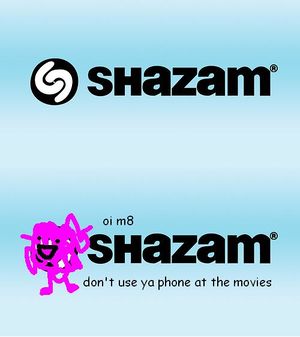 To accommodate for consumers who were unsure as to how to properly use the app, Shazam designed a new mascot in 2009 and was later sued by Roger Hargreaves.[1]

Shazam is a hyooooooooge database that helps you find out stuff about music. And music about stuff. You used to have to ring them up but as of recent years they've developed an app which recieved kajillions of downloads on the Eye Tunes app store, outdoing its various competitors. One of these competitors, SoundHound[2], is actually way cooler because it allows users to identify songs by means of humming and singing, but nobody notices because Shazam always leaves a huge mess and never bothers to clean it up.

Guess it didn't work when they...

Dear Shazam headquarters,[3]
I've recorded a song into my phone and the app won't recognise it.
What do?

Google the lyrics, you lazy git.

Dear Shazam headquarters,
For some reason it won't work when I sing the lyrics myself.

I thought I already told you, that's why SoundHound exists.

Dear Shazam help desk,
The person behind me in the cinema is being extremely noisy.
Could I record this into the database and recieve results?

I'm unsure, but I would strongly recommend it.

Whoops! Someone spilled a bottle of shazams onto the floor. Help pick them all up.

Yo Mistah P. Nicholas Tee, you can come hang in my crib anytime. I'll let you have some o' my cheese.

Eugh. No sank you.

I dropped some footnotes behind the refrigerator just last week.[edit]