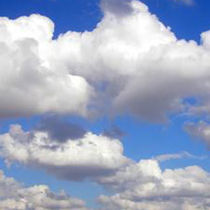 If you look up, you can see some blue stuff. That blue stuff is called "sky". If it isn't blue, you may be inside. If this is the case, stick your head out of the window and stop staring at your ceiling. Do you see it now? If it isn't blue, that is because it is covered with things called "clouds". These are made of "water" that has "evaportated"

Ok, so that stuff up there is blue. Apparently, that's because when light goes through the atmosphere, bits of water make it change. Some think this is because of some magic spells, but they also think that the stork brings babies, so like they know ANYTHING.

I bet you didnt know that people cant live on the sky. See, theres this invisible stuff that means when we visit the sky, we fall off. This is called gravity.