Sometimes, you may turn on the television and enter the channel number for the Weather Channel. Other times, you may ask, "Hey (Siri/Google/Cortana/Alexa), what’s the weather forecast?". Or, you simply search up "(city, state) weather". You take a look at the forecast. Then, the very next day, the forecast turns out to be right, and it's a beautiful, sunny day (or whatever was forecasted yesterday). How does the weather-man know these things? How could they predict the weather so accurately? The answer is simple: The meteorologists control all weather on earth. Er, well, 98% of it - this excludes natural disasters... those are controlled by scientists. And of course, everyone knows the super-sauropsids control the volcanoes.

You may be asking yourself, "But how do meteorologists control the weather?" The answer is simple, really. They use their fancy-schmancy computers... The same ones they use to "predict weather patterns". Indeed, they cover up the truth very well. 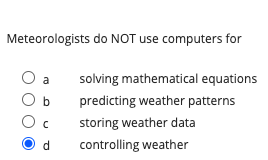 What if the forecast turns out to be wrong?[edit | edit source]

They shoot the computer that did it.

Because why not?
....
For real, though, meteorologists wanna control the weather because it gives them, like, a bunch of power. You don't wanna piss off a weatherman, he'll stir up some really bad weather near your house. Anyways, another reason they control the weather is so teh weathermen - and teh weathergirls, who are even more feared than the dudes for their mood swings and all that - can control the GOVERNMENT! Kind of. I dunno how.... but never underestimate the meteorologists. Like, evar.

They could be on to us right now! Quickly, let's skedaddle before lightining strikes!