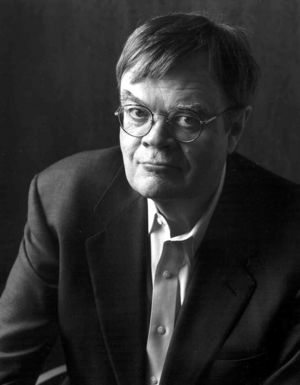 With your host, Garrison Keillor.

It's the birthday of poet Palmer Dinkel, born in Newark, New Jersey in 1929. He fell in love with the poetry of Walt Whitman when he was in high school, then later with the man himself when he ran across a picture of Walt in a swimming costume. Dinkel framed the picture and placed it over his desk where it remained the muse of inspiration for his subsequent works over the next 51 years, including: "Bearded Splendor", "Muskrat Love", and the voyeuristic classic, "Scenes from a Men's Restroom".

Here's a poem by Palmer Dinkel for his birthday. A poem from 1959, and what many consider to be his master work:

"Requiem for a Rusty Fork"

Heel, discarded cutlery.
Splines obscenely twisted;
Bane of the dining room table
Once a proud solider, marching smartly plateside
Deftly parrying the teasing stabs of friendly knives,
While stowed away in the cupboard after maneuvers
Until called from furlough to wrest open a sealed drawer,
Barred by a forgotten key
Never returned to the barracks, nor the silversmiths
But exiled to the utility drawer,
Forevermore

"Do well, be good to children and old people, and please... ask before touching.®"

Load another episode of The Writer's Almanac