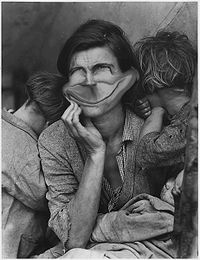 It was a really great depression!

“It was a funnily sad time”

~ Roosevelt on the great depression

The great depression was sadly brilliant and people had a suicidely good time. Unlike The bad depression [citation badly, greatly needed] the population of America wasn't wiped out by mass food poisoning.

Caused by the wall street crash, an incident where an "invisible" lorry smashed into wall street, the depression had fantasticly, ruined many Americans lives. In a goodishly bad way.

The grand, not so grand endings[edit]

Most of America was now nicely depressed.