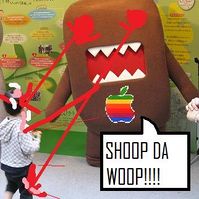 The Juice Monster is an urban legend that is said to go around at night "drinking" super Japanese tourist, Duncanist and retards.

Legend has is that the juice monster looks exactly like domo-kun but bigger and with a multicoloured Apple logo on his torso, it is also said that he howls shoop da woop whilst using his lazer eyes, which as far as the furries and Duncanist are concerned is blasphemy.