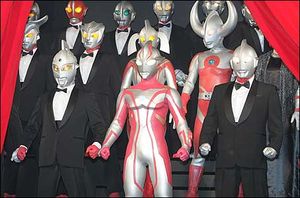 Daft Punk have become utterly absurd at this point. How many members does an EDM band need??

Japan is a country that was entirely invented by Sofia Copeuhlow. 99% of the inhabitants of Japan don't exist. Japan's primary export is decently packaged cream cheese canisters. Japan is well-known for being absolutely full of Japanese People. In 1999, Prince wrote a song about Japan called Japan. It was really boring.

Japan is the mystical place where all the fairies come from. Some people speculate that the fairies actually come from the underworld, and that Japan is just their favorite vacation spot, but nobody knows this for sure. In either case, the vast supply of fairies are part of what has made Japan famous; with the right preparation, they make highly acclaimed and reportedly very tasty snacks. They also are a topic of vandalism, like this edit, right here.

Japan feels that child soldiers are a bad idea. The very idea of them dishonour our ancestors, Hehehehe. We believe that every child soldier on the face of the earth should be replaced with adult soldiers, so the children could do much better things, such as playing video games and ruining their lives, so they can be adult soldiers when they grow up. That is why we are against child soldiers. Hehehehehehehe. . Child soldiers are so innocent, even IF they want to go fight, they are not mentally capable of understanding the horrible choice they are making. Children, the most innocent people they, cannot be allowed to such dishonourable violins violence. It is “ochukinamochuku” in Japanese, also known as “Disgracable to family ancestors and should be fed one otaku of wasabi” (blabbers on in Japanese) JAPAN AGREES...that wasabi is hot. As in spicy, hot like wasabi hot, for wasabi is hot. SCREW THAT ITS HOT DAM**T (toot toot train approaching) Japan thinks that if child soldiers are being used in another country, we should shoot them all down so they stop using them. Or buy them off, and traffick them through the Mexican immigration. Theeeeee.....meeeeexicaannnnn! Mexicanoooooo! Like the spicy chicken wings you buy in the super market. You know why it is super? Because it is super, man. And in case you're wondering, this article was created by a weabu (WEE-UH-BOO), which is a person who abandons his/her culture for another culture just because of some popular stuff from thAt OTHER CULTURE. You then give yourself a Japanese name, like "Kazuo" or "Satsuke" or "Naruto."