2 + 2, or Fish Equation is a common mathmagical spell equation that causes several small edible aquatic creatures to appear. Consequently, this page is made of fish. 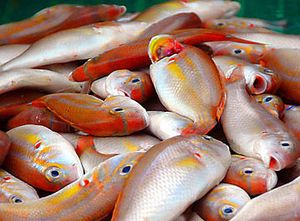 An example of magical fish

The Fish equation was discovered in Rome in 1200 BC, where it was known as Pisces opifex ex nihilo. It fed the Roman state for many years, until one day, a group op people allergic to seafood had enough of their starvation, and slaughtered all the mathamagicians, leaving the secret lost forever. These raiders we know today as Serbs, and the ensuing 'Fish Wars' destroyed Rome and the Holey Mackerel Kingdom. The Serbian raiders were ruthless and bloodthirsty in their conquest, a well-known quote from Platypus, a dying roman soldier, illustrates this: EGO sum non validus ut reperio meus puga pyga!, loosely translated as I can't find my ass!

In it's place, governments have led their people to believe that 2 + 2 is in fact, four, but this is entirely a constructed lie, with no basis in fact whatsoever. A common method of ensuring that The Equation is never again found is by their most brilliant minds is suspending them in a jar of jello for some reason.