Ants in my Driveway

Often it happens that I lie awake at night, unable to sleep, or sleeping fitfully as I ponder the ants that urinate in my driveway. It isn't enough that they inhabit my property, feast on my fertile grasses, and write weekly letters to the editor complaining about the appalling conditions under which they live? Of course I am never named in these letters, but I know that everyone knows that they mean me. Who else's ants write to the local newspaper? 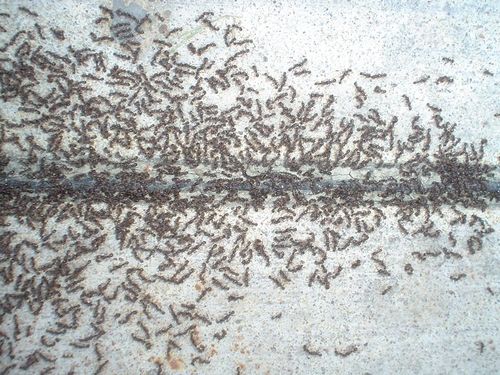 The editor, for his part, claims to have no such letters in his possession, nor any idea who I am. But like most people I meet, I suspect that he's just too busy to talk to me, and latches onto the most readily accessible excuse available. He's probably never even considered that he himself has hordes of tiny ants, urinating in his very own driveway, at all hours of the day and night. Perhaps if he received a letter of complaint from one, then he'd believe me, and be forced to apologize. Then he'd have to write me a letter. And so I check my mailbox thrice daily, except Sunday because there's no mail delivery on Sunday. Then, I'll check only once, on the off-chance that my postman has noticed a letter for me on the floor of his truck, and has brought it to me straightaway.

But it is night, and my postman is at home sleeping.

I know this because I've watched him sleep, and wondered how many more hours it would be before he would wake up and bring me my letter. He usually wakes up at about 4:15 AM, which, I have learned, is considered rather lazy, indolent, and unprofessional behaviour by other postal workers who I have also watched, and who talk about my postman when they think no-one is listening. I listen, and watch. And those postal workers usually wake up no later than 3:30 AM.

It is now 3:41 AM, and my postman is at home sleeping. Elsewhere, other postmen are showering and laughing about him.

So here I lie, hands clasped tightly over my ears, trying to quiet the loud rush of the torrential downpour which even now threatens to permanently stain my asphalt. It is too early to use my pressure washer. The stack of fines on my night table for breaching city noise ordinances reminds me of this.

So I wait for the sun to come up.