From Illogicopedia
(Redirected from Asian)
Jump to navigation Jump to search

Asia, or Afropia to the unintelligent, is a big, huge, giant, large, obese, massive, humongous, ginormous chunk of land found floating of the Pacific, Indian and Arctic Oceans. Home of the twenty bearded cow, the continent, oh yeah, continent, was discovered by a FedEx airplane guy who had recently ate and pooed a brick, spending more than Sixty seconds in the bathroom causing his plane to bulge and fly to Asia. In an attempt to fire a rifle at it, he accidentally gained too much weight, sending himself into a deep coma to never come back. 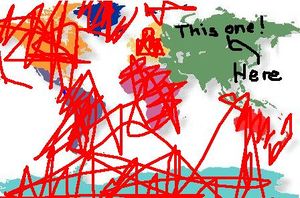 Do you see Asia?

Only forty years after the event of a window having cancer did someone recreate the dollar bill and call it "Europe". This sparked the Civil Revolution and the hunt for the "Other Land". Soon Africa melted onto a man's map and the man committed suicide. A leopard was on his nose. This discovery made McDonald's run to the North Pole and back only to find out that "Microwave + Fork = BOOM!'". Then Black people were made and God was satisfied.

However, Asia was not melted but rather smeared onto the map. Therefore magnifying glasses made the continent appear larger, and hence, the turkey. Now twenty thousand million billion people are in the area of chinka chinka China and India is full of weird people. Soon the monkeys will find themselves hanging on flagpoles instead of tree branches because a man lost his eye. How sad! So all we have to do is prevent the Pope from finding true love so we can all go to sleep without having nightmares of badgers that look strangely similar to Tom Cruise...

Asia now makes asian food and is the author of a two page book: Life as a continent bigger than any of the others on your planet that is an unremarkable speck in the galaxy, available to continents all over the universe.

Also Asia has oceans, like the Indian Ocean, or even India! Oh wait, that's not an ocean, that's an un-ocean.