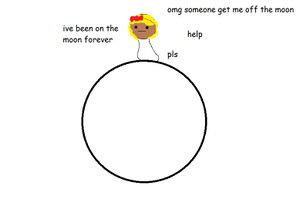 Well, at least Earth's better than some places...

Ah yes, the Chocolate Milky Way. One day I happened upon this wondrous sight whilst stargazing out in my rocket-servatory. You were with me, Beatrice, making calculations I couldn't understand. I wasn't actually good at science – I just liked to look at shiny things in the sky and happened to have limited knowledge of natural electrical energy.

Suddenly a shower of lights and possibly Maltesers leapt forth from an angle of fifty-seven degrees to my eye. Surely, I thought, some of those had fallen to our soft cushiony Earth, as I stepped outside my observaship to investigate. I had found about fifty acorns scattered around the vicinity which I had momentarily considered donating to Tom Nook before realising these acorns were in fact radioactive and contained traces of Starglo. Instead, I stored them in the treasury with my chwiss cheese mo0n chaze and assorted other souvenirs.

That was when I noticed another kind of eerie light – that coming from the uppermost floor of my own home. The silhouette against my window was looming loomingly and pulled at my stitches. Curious, I crept upstairs to investigate.

And then I saw her. It had taken me a while to coax her from behind the chair, though it seemed she brought no weaponry and meant no harm. She spoke the word of ootrent, which at that moment I did not understand, though it seemed of utmost importance. Quickly, she gathered the radioactive acorns and Maltesers on the table and ate them one by one. I figured she probably hadn't eaten on her long journey here, and took her to Pancakes on the Rocks, which actually happened to be in Beverly Hills and nowhere near the rocks.

The waitress had been sleeping on her grill, her face slowly disintegrating into pieces of burnt fabric.

"SUNNY!", I screamed from the nearby doorway (which can't nearly have been as fetching as the classic "Pillow! Are ya sleeping?"). It awoke her with a start.

"You came for the pancakes, I'm assuming?"

Whilst I attempted to make an order for the both of us, my extraterrestrial guest seemed to have no grasp on earthly manners. That young woman insisted on smashing her egg on the counter. The waitress tried unsuccessfully to direct her to the grill, and yet by this point she'd been attempting to piece together her broken eggshells with industrial-grade maple syrup.

I had to drag her out, apologising profusely whilst she was upside-down.

Thence I took her to a ringmaster, which was all well and good until she'd gotten hold of the trampoline, still carrying her syrup-covered egg on her person.

After giving up on all other efforts to communicate, I took her home and taught her English.

At least, that's what I thought. She stared at me, her eyes deep as black holes. Or maybe buttons.

"Before I come to the mountain and head of chocolate I was driving around his ship. I ship to explode, I leave a trail of Maltesers behind, fell to the ground."

It all makes sense. With assistance from my acquaintances – and of course you, Beatrice – we tried to figure out how to launch our newfound friend safely into the chocolatey depths of the stratosphere. Attaching her ship to a cannonball didn't work, and neither did ramming her ship into a cake. It was all down to getting rid of the sidecars.

All spacecraft around here run on hot chocolate with a side of not chocolate. We had to keep our pets away from it, but eventually things turned out for the better.

I cannot help but wonder, Beatrice, where in the galactic chocolate realm she may be.