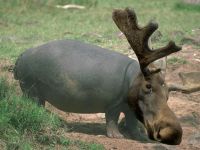 Such modern conveniences as the monorail and the hippopotamoose are the direct result of bat fuck science.

The bull goose loony of modern physics, Albert Einstein, once told a class of undergraduates, "although yes, it it true that there is no business like show business, don't give up hopes of babes and an entourage just yet. Chicks dig bat fuck thought experiments."

Unlike most experimental methods, we scientists who employ the bat fuck scientific method feel no responsibility to be honest, or productive, nor indeed do we need to do anything unless we damned well feel like it. In the words of René Descartes, "only by using my patented fuck bat méthode scientifique™ can one hope to be absolutely objective in ones research. The complete absence of social responsibility frees us [1]".

Such abominations unto the Lord as cloning and stem cell research are but shadows of the true horror that is leading edge science. Religions of all stripes are on high alert, and are battening down their hatches against the coming storm of bat fuck anything whatsoever.