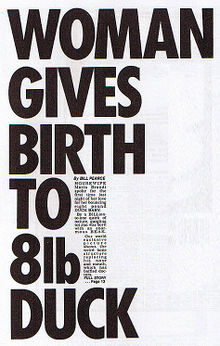 Ducks are born of humans, usually.

Once upon a time, in a far off land, there lived a mango. It had a crown. A duck came upon the mango.

The mango fell and rolled away.

The duck then took its rightful place as king of the...trees.

There once was a lady named Zuka Duka Wawa, who drove a spaceship, her pet elephant hated ducks, and she had orinthophobia, fear of birds, including ducks. Mrs. Wawa had 2 million children and 5 trillion Webkinz.

Of course Mrs. Wawa screamed like nuts. She would fly herself to Canada if the airport wasn't crowded with ducks. So she herded her elephant outside to play Whack-A-Duck. After the ducks where squished the road was duck-print even in 2840. 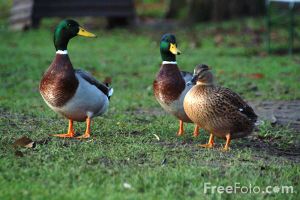 "Ere, what happened to you?"
"I fell in a pot of brown paint."
"Oh right. I thought for a minute there you'd rotted away or something."
"Quack?"

As with most political figures, ducks have been mocked and ridiculed unfairly. They are protrayed as clumsy, greedy, and silly. Of course, we all know that that's all untrue. We must hunt the duck-haters. HUNT THEM!

I was once a treehouse, I lived in a cake! Time for me to retire now, and become a DUCK!

END OF SONG SO SHUT UP NOW[edit]