Economics, better known to simpletons as EKonomiX, is a rock band founded by the United Muppet Society. Its lead singer, Kurt Kobangle, says "My band will own the rest!" That claim has not yet been confirmed. So, Without further adeu, I bring you "EKonomiX"!

The Band was started by Kobangle, with Kermit Records in alliance with the European Union and the Eh? Society, with some help from Colonel Sanders. The band is thankful for donators like you. Thank you. 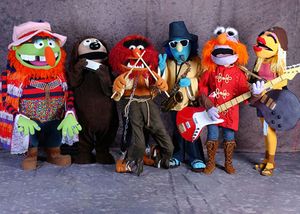 EKonomiX in their Group Shoot

The band started in 2076, with their first single, "If That Ain't Love, Which it Ain't and I Know It" and that got them a #-234.4 hit. After this success, the band released "China Makes Some Decent Crap, But I Like American Made Better" and was another success. After these two good songs, it was decided that the band would go on tour and consequently be adored by millions of teenage girls and their mothers. Soon after that, they broke up due to NAFTA eating the last pickle.