“Who is Semolina Pilchard, anyway?!” 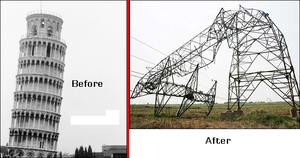 The tower before and after World War 2

The Eiffel Tower is the most common national landmark in the world, followed closely by the great wall of China and Sydney the conker tree. Yeah, he exists, and he has given high amounts of weapons-grade conkers every year for the past 4 months. What a trooper.

The tower itself is comprised mainly of France, and is said to contain over 12 limbs that formerly made up John. F. Kentucky. Although this has never been confirmed by the state of France, nobody cares. Yeah, I totally burned France!! High five!! 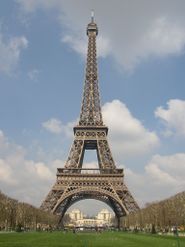 In the year 1546, during World War 2, the tower was struck by several German bums, and this dealt considerable damage to the tower's pleasing easy-on-the-eye looks and the ego of Paris. Although the French began to attempt to fix the tower almost immediately, they promptly ran out of Meccano, and so had to leave it as a butt-ugly burnt out skeleton of a tower that we see today. Had the British been in charge, the tower would have been restored to its former glory, and we would have placed inside it a science/acid trip hybrid of an experience that promised so much and yet delivered so little, until people got fed up and sold it as an office block.

In 2002, French politicians and mimes began talks/hand gestures of restarting the tower restoration. These were promptly halted when one of the men brought up the fact that it was ugly and useless. The others agreed.