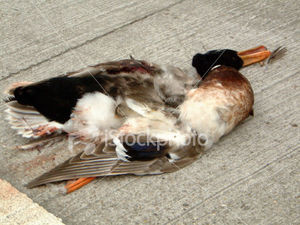 The aftermath. Researchists are concerned.

Exploding Duck Theory postulates that for every molecule in existence undergoing a chemical change at a given time that proceeds to contribute to the overall probabilistic entropy of the universe, a duck explodes.

By the sheer magnitude of ducks exploding in this day and age, it is suggested that either this theory is complete nonsense, or that we have a much more serious problem on our hands than thermodynamicists originally thought. Since the early 1900s, ducks have been spontaneously combusting with greater and greater frequency. This not only supports theories regarding the interconnectedness of ducks and the greater picture of the entire universe but has even gone so far as to push several species nearly to extinction, including the triple-crested blue mallard, reducing its presence to mere legend in this day and age.

The danger of exploding ducks expands beyond merely towards these hapless avians, of course. While the ducks themselves are little more than a side effect, the cause to which they speak may be the end of us all.