It was his fault.

He is the justice. Not you. He has the power to rend the space-time fabric asunder in the pursuit of dashing evildoers, or perhaps even in the pursuit of ugly ones! To capture and destroy evildoers, he uses the unholy power of revisionism article modification, to lure them out to edit articles (such as this one), whereupon he will capture them in his laser jaws. Only then will his stomach be satisfied and the world safe from evil.

Or that's what the legend says...[edit]

In reality, son, he's just a legend, nothing more. You can't believe everything you read or see in Illogiland. I would be more wary of horrors like Bonjook BONJOOK, The Banana God, or even worse, The One Who Goes By The Name Master Ebony Crafts God someone else. But in preparation, I have told you the story of the evil Fiord Bonjook BONJOOK, The Banana God, so you will be wary of deadly beings such as this one when you begin your quest to rid the world of kittens. For they will stop you at every turn, but you must persevAUGH! 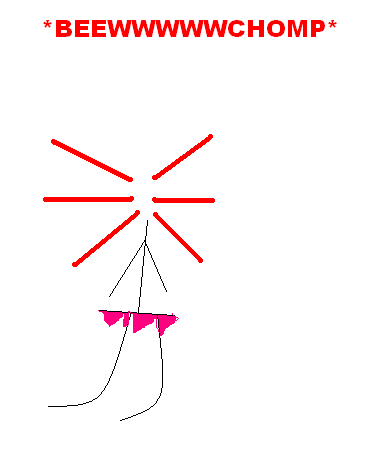 Run, my son, or he will slay you too! Flee to your old Aunt Betty's cottage...