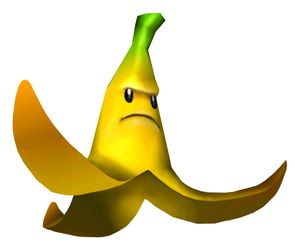 BONJOOK, The Banana God is the god of bananas. He demands that His name be capitalized. If you do not, you shall suffer his Power. He is not an Orange. He does not come from the Coconut. He has a squeaky voice with an accent of Monke.
If you laugh at it, you will be Fed-Exed away.
BONJOOK has only one commandment: Rule 8 - If anything goes wrong, it is always Jr's fault! 'Also its confusing that he has only one commandment and its rule 8'

BONJOOK was created when humanoids first discovered the banana was edible. So many were then eaten, that the souls of the deceased bananas collected into one peel, that it became BONJOOK.

The giant banana peel began then to unleash his wraith upon the humans, occasionally turning them into Bananaspawn, the most famous of which was the Bananaspawn General known as 'The evil one'.

The humans tried to fight back, to no avail. The mighty Bananagod destroyed every banana-eating human he could find (which was pretty much everyone except for a few people who thought they were squirrels), then began a thousand-year slumber. 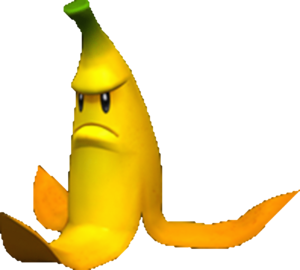 BONJOOK has often sacrificed bananas (obviously). It is known as his Wraith. If you do not capitalize Wraith it will happen to you. His Wraith is a cruel process that goes as follows:

Here is a step-by step guide on how to summon the mighty Bananagod.

BONJOOK is a banana and, as such, is not a carrot. HE IS THE MAN! His potassium runs through his veins with MIGHT!

It is well known that Helicopters only fly due to BONJOOK's good will. The exception to this is the Bermuda Triangle where Shia LaBeouf performed an explicit act on a banana. The Wraith of BONJOOK hit him so hard that to this day any helicopter that flies there will invoke his Wraith and have its rotors turned to Jelly Babies and will fall into the sea where the pilots will be Fed-Exed away.

BONJOOK and all of his power is created from potassium, but every sunday BONJOOK travels to Chick-fil-a since it is know that on that day in one destination in Florida, the earth crumbles to the core where he releases the ULTIMATE Wraith. Every Taco Bell will then be destroyed within a 100 mile radius. This part is unknown though to most humans because the awesome power he gains every sunday helps erase all damage. But, all the bathrooms will stay the same, it is not known why though.

the creator of this section later died to BONJOOK, due to him not capitalizing BONJOOK, rest in eternal pain banana traitor.

BONJOOK has the power to grant gifts to those who worship him. These gifts are normally given to the Monkes.

The Monk Monkes are the preists of BONJOOK. They are in charge of sacrificing to BONJOOK, accepting gifts from BONJOOK, and teaching other Monkes and Humans the way of the BONJOOK.

BONJOOK is only afraid of one human and this man is Bob Ross. It was Bob who defeated BONJOOK in the long ago Wars of the Mountain Dew Fields. BONJOOK was fresh from the conquest of The Blue Rice Paddies and had with him an army of over 10,000 bananaminions and 28 Evil Robots. Only Bob Ross stood between BONJOOK and FULL ENLIGHTENMENT. Bob had with him only his trusty paintbrush and a small brigade of Treedemons (but my, they were happy little Treedemons). It was a huge battle and many of Bob's Treedemons were killed and even more of BONJOOK's bananaminions. But at last they faced each other on the battle field, surrounded by their dead and dying armies. It was then that Bob Ross uttered a sentance of great evil “I like Bananas on Pizza” BONJOOK howled with anguish and was forced to flee. Everyone cried for the banishment of the Banana god and lived in suffering ever after, until the return of BONJOOK. BONJOOK was forced into hiding but he has recently returned, following Bob's death in 1995 and is returning to his full powers as you read this.

BONJOOK valiantly gave up the last of his eternal life during his demise in The Wreck. Legend says that this eternal life was divided up equally between each and every member of the Fluffle, thus they never age.

BONJOOK no longer needs to be avoided, since he has sadly passed away. However, if you venture into the past and want to ensure you do not incur the Wraith of BONJOOK, you must eat as many bananas as possible. Even so, you must grow bananas everywhere. If you do everything right, you might live for another twenty years before accidentally eating something without banana matter in or on it. 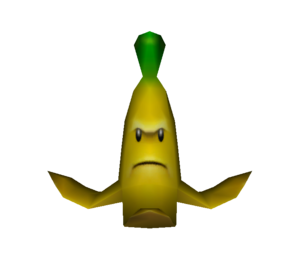