“This article had better be written in the present tense.” 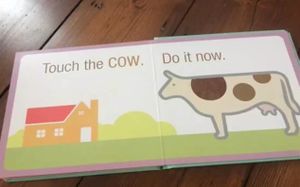 Oh, the cow? That was for the hairdresser.

We have carefully colour coded these gifts green and fuchsia so as not to cause confusion. If any confusion was to occur it would distract me from pulling the appropriate face and applying the right degree of eye gleam in order to express my gratitude and prevent any hurt feelings. I would like to thank everybody in attendance tonight, especially you, circular yellow blob woman. Yes, if it weren't for your foresight this likely would have turned into a rainbows-and-bunnies-themed surprise party, and we all know how badly that turned out last time.

Now, if it weren't for those suspiciously close friends with a complete absence of any sense of privacy things would be running relatively smoothly at the moment, but the man in the tie thought it would be a good idea to watch over all of the gifts while we were cavorting and engaging in general festivities. Whilst my neighbour (who also shared my birthday, and that is the point at which our likenesses end) was receiving scented soap, shower gels and a receptacle he could only describe as 'feathers in a pot', I had some rather confusing gifts on my end. Sock cheese? I honestly thought it was just disintegrating fabric and mouldy leftovers. Once I'd received a live skunk and he ended up with a sachet of lemon scented moist towelettes, I decided to draw the line.

YOU DON'T EVEN KNOW WHAT TO DO WITH A LEMON SCENTED MOIST TOWELETTE. You'd probably put it around your neck or something. And besides, that's not even a portable popcorn cooker you're holding — it just so happens to be a limited edition Turbo Tornado vacuum cleaner (thankfully it hadn't been one hundred years old, since things back then were one hundred years old) that I am likely going to use to clean up this mess, including all of the wrapping paper and lemon scented moist towelettes you've left lying around.

The skunk caused a mild disturbance to say the least, and many people left. The two overly-curious gentlemen who were minding the gifts remained however, with agonisingly innocent expressions on their faces. They only had one gift to offer me. It was a single handkerchief.

It very much came in handy.